- The RBA has left interest rates on hold. The arguments to cut or hike rates are evenly balanced and we can’t see an official rate hike until second half 2018.

- For the RBA to hike rates just to slow the Sydney and Melbourne property markets at a time of softness elsewhere would be madness.

- But various threats to the hot Sydney and Melbourne markets are growing and point to slowing price gains.

The RBA provided no surprises following its April board meeting leaving the official cash rate on hold at 1.5%.The RBA remains more confident regarding global growth, sees Australian economic growth as moderate, regards the labour market as being mixed, sees a gradual rise in underlying inflation and continues to see conditions in the housing market as varying considerably across the country, but sees recent regulatory measures as reducing the risks associated with high and rising household debt. This note looks at the outlook for the cash rate, the impact of bank rate hikes and the implications for investors.

Our assessment is the cash rate has probably hit bottom after falling from 4.75% in 2011 to a record low of 1.5% last year and that the next move will be a rate hike but not until second half 2018. Another rate cut looks unlikely because:

By the same token it’s too early to be thinking about hikes as:

The RBA has to set interest rates for the average of Australia so raising interest rates just to slow the hot Sydney and Melbourne property markets would be complete madness at a time when overall growth is still fragile, underlying inflation is well below target and property price growth elsewhere is benign or weak. The best way to deal with the hot Sydney and Melbourne property markets and excessive growth in property investor lending into those markets is through tightening lending standards, which APRA has just moved again to do.

But what about bank out of cycle rate hikes?

The banks have recently raised rates for property investors and on interest only loans by around 0.25% and for principal and interest owner occupier loans by around 0.03%. The stated drivers were higher funding costs (presumably following the back up in global bond yields over the last six months) and regulatory pressure to slow lending to investors and higher risk borrowers. More moves may lie ahead if global borrowing costs rise further but again would be focussed on investors & interest only mortgages and in the absence of RBA rate hikes are likely to be small as only 20-30% of bank funding is sourced globally. But it’s worth putting “out of cycle” moves in context:

While strong population growth means that underlying property demand remains strong, the threats to the hot Sydney and Melbourne property markets are building: more macro-prudential measures to slow lending to investors and to more risky borrowers have been announced; the banks are raising rates out of cycle particularly for investors; the May budget is likely to see a reduction in the capital gains tax discount; all at a time when the supply of units is surging; and home prices are ridiculous. Taken together these moves are likely to result in a significant dampening impact on home price growth. 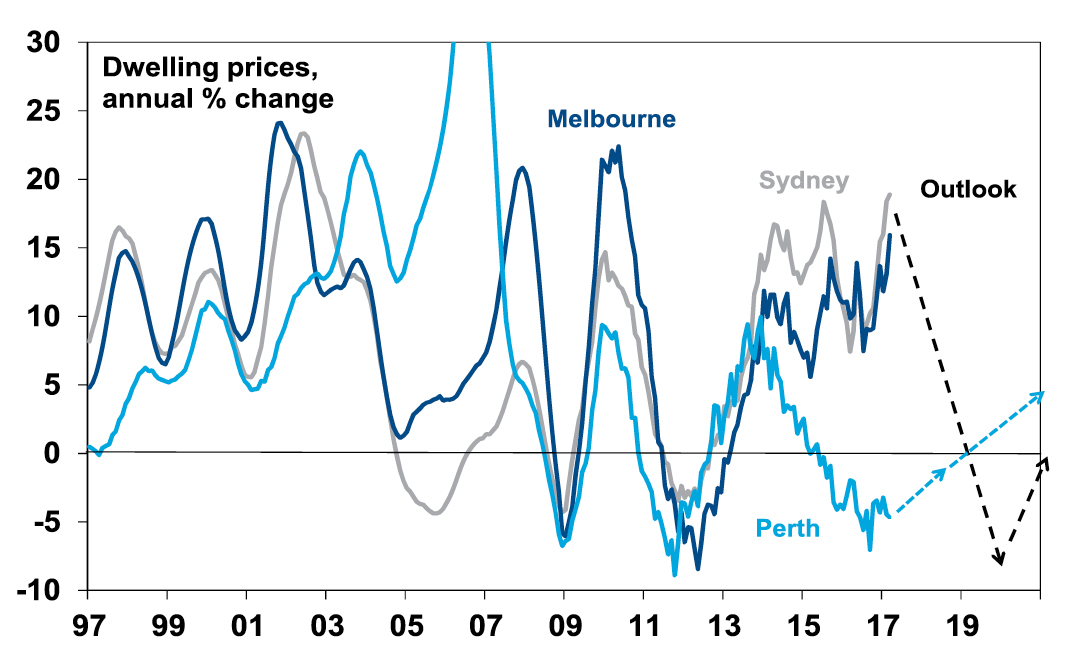 We continue to expect a significant cooling in price growth in Sydney and Melbourne this year followed by 5-10% price falls commencing sometime in 2018 after the RBA starts to hike rates. By contrast Perth and Darwin are getting close to bottoming (as the mining investment slumps nears its low) and other capital cities are likely to see continued moderate growth. Unit prices are most at risk given the increasing supply of units.

Will rate hikes crash the economy?

There seems to be a view that household debt is now so high that any hike in interest rates will cause mass defaults and crash the economy. This is nonsense. Yes household debt is up but not dramatically since the GFC and interest payments as a share of household disposable income are at their lowest since 2003. Mortgage rates would need to rise by nearly 2% to get the interest servicing ratio back to its most recent 2011 high - which slowed but did not crash the economy. And most Australians are ahead on their debt payments. 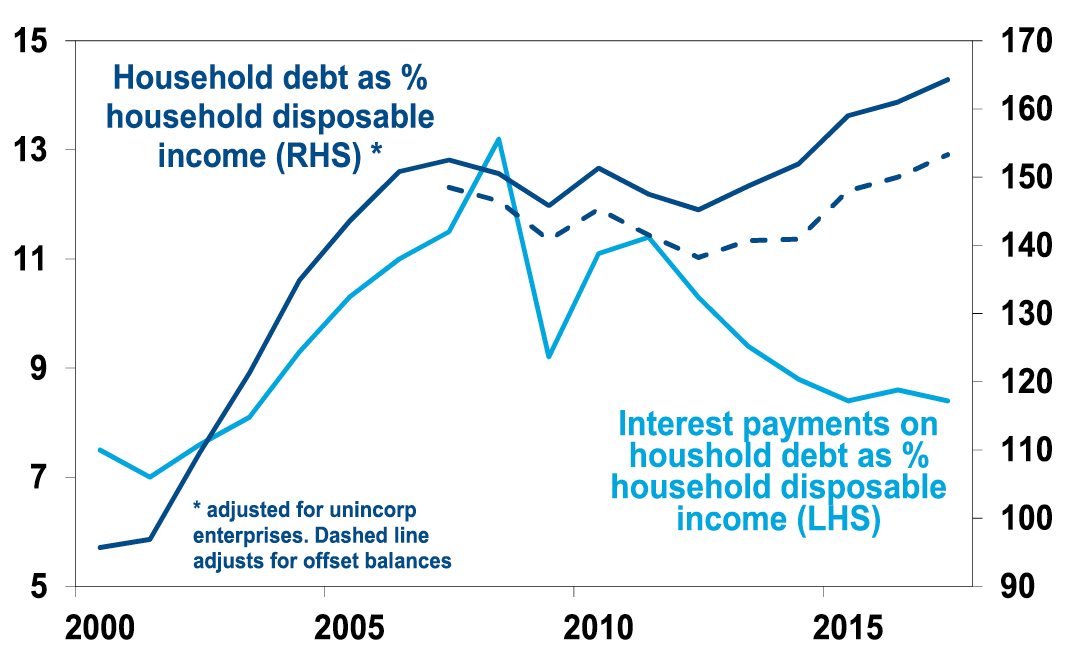 Finally, the RBA will move gradually when it does start to raise rates and knows households are now more sensitive to rate moves and so it probably won’t have to hike rates as much as in the past to cool any overheating in the economy.

There are several implications for investors. First, bank term deposit rates are set to remain very low. As a result, there is an ongoing need to consider alternative sources of income. Second, be cautious of the Sydney and Melbourne property markets, particularly units. Third, remain a little bit wary of the $A as an on hold RBA at a time when the Fed is likely to hike rates another two or three times this year could put downwards pressure on the $A. So retain some exposure to unhedged global shares. Finally, with low interest rates growth assets providing decent yields will remain attractive. This includes unlisted commercial property and infrastructure but also Australian shares which continue to offer much higher income yields relative to bank term deposits.

Australian shares offering a much better yield than bank deposits 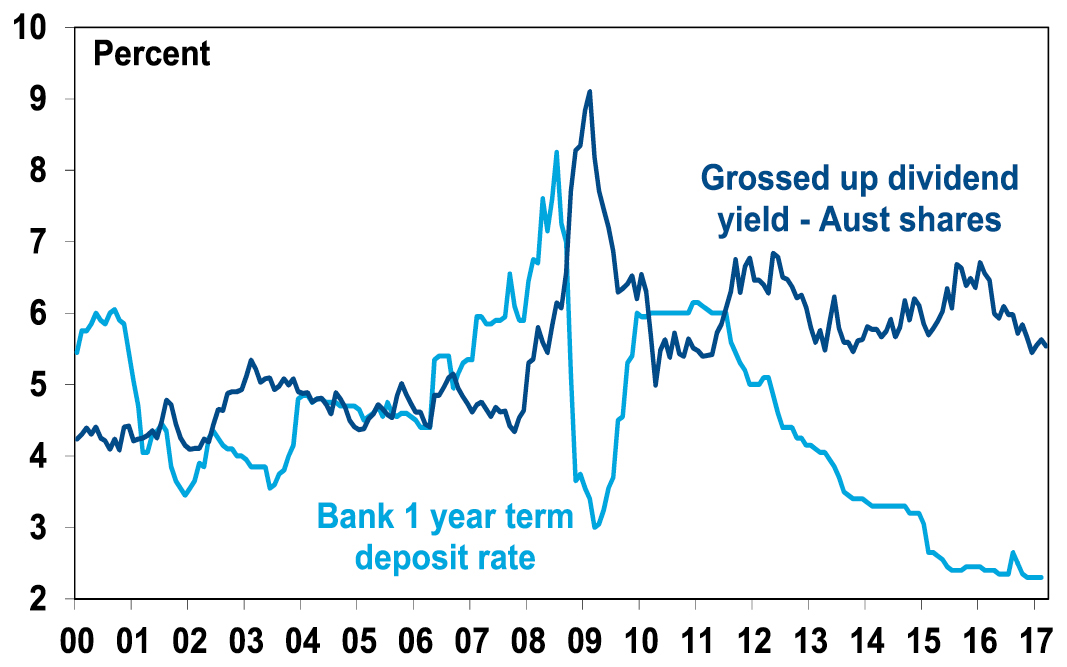