The table below provides details of the movement in average investment returns from various asset classes for the period up to 30 June 2020.

Past performance is not a reliable indicator of future performance. The Global Listed property reference index changed to FTSE EPRA/NAREIT Developed Rental NR Index (AUD Hedged) as of August 2019

The worst is behind us according to many analysts and economists. Covid-19 has had the most damaging impact to the economy since the Great Depression yet there are signs that improvement has commenced even though the world is still in the grips of the pandemic. The easing of mobility restrictions across the globe has enabled people to get back to work and resume a more normal way of life.

In the US nearly 5 million jobs were added in June as businesses have reopened around the country. The economy has now recovered roughly a third of the more than 40 million job losses seen through the shutdown.

In Europe forward looking survey data in the way of the Eurozone Composite PMI rebounded for second consecutive month to 48.5 in June versus the prior reading of 31.9, suggesting the economy is moving back toward expansion. This included significant improvement in the troubled Services sector with the PMI reading of 48.3 from 30.5 in May. Of note, France is back into expansion mode with composite PMI going above 50 to 51.7 to be the best-performing country. Spain is on the cusp of expansion with a composite PMI of 49.7 and this is a trend globally.

We are seeing rebounds in a range of other economic indicators, in particular Chinese business conditions, US car sales, US pending home sales, German retail sales and Australian retail sales.

These improvements come despite a deterioration in Covid-19 infections with the US and Australia seeing a meaningful increase and a range of other countries seeing no meaningful improvement. 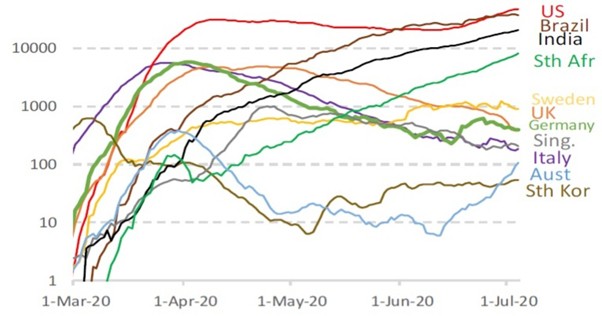 In Australia, the acceleration in infections is confined mostly to several suburbs of Melbourne in Victoria. To control this, local lockdowns have been accompanied by a forthcoming closure of the border with NSW. This is expected to have minor impact on the economy. It seems that authorities are much less inclined to impose wide scale stay at home orders as was done in the initial phases of the outbreak. However, this remain a risk to economies both domestic and abroad.

The economic support from government and central banks continue to support financial markets generally. The Australian share market (2.6%) continued the bounce back from the low seen in March. Small companies (-2.0%) underperformed as increased volatility driven by increased Covid-19 infection drove investors to less risky areas of the market.

Investors continued to seek growth with Information Technology (6.0%) the strongest performer as Afterpay Touch Group (28.6%) continued its rampage. Consumer Discretionary (5.4%) and Consumer Staples (5.1%) also performed well with retail sales improving faster than what had been expected a short time ago. Telecom Services and Energy (-2.0%) were the weakest sectors with REITs (-1.4%) also struggling over the month.

International shares (2.3%) on a currency hedged basis was a little behind the local market. Volatility increased through the month as investor concerns around the potential of a second wave driven lockdown rose as infections grew, particularly in the US. This led to an unwind of some of the gains achieved early in the month.

Emerging Markets (3.5%) was strong outperforming the developed market index and the local market despite significant issues around Covid-19 infection in Brazil, India and other developing countries. Brazil (9.1%) was a standout performer in Emerging Markets despite their challenges. India (7.9%) and China (7.8%) were also strong performers.

The rally seen to date remains for many a little ahead of the underlying conditions and is a reflection in our view of the support that has been provided by government and through easing of monetary policy and quantitative easing. There remains risk from a second wave of Covid-19, if it results in a significant increase in restrictions of movement and activity within the economy both domestically and abroad. However, if stimulus remains and government can avoid further lockdowns then the recovery in economic conditions will likely continue. This will likely be constrained by any longer lasting restrictions such as international travel. 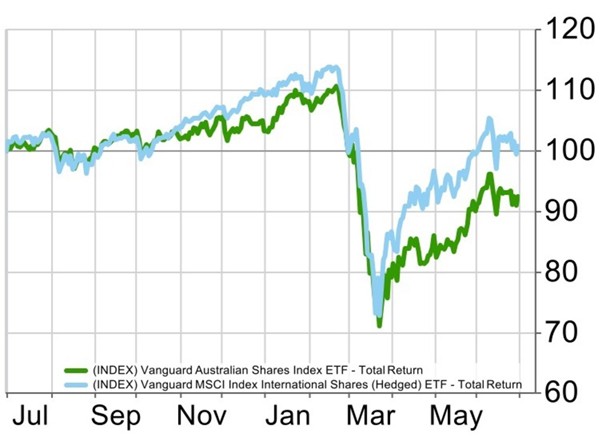 Fixed interest markets also gained over the month with early losses recovered as concerns grew through the second half of June. Australian fixed interest (0.3%) was a little behind the broader international market (0.5%).

The Australian 10-year bond yield ended steady over the month, however early in the month the yield rose to 1.17% before falling back to 0.89% as initial confidence around improving economic data gave way to second wave coronavirus concerns. The US 10-year bond yield which was already being impacted by elevated infections saw similar movements, rising to 0.92% before ending the month half a basis point higher at 0.66%.

The Australian listed property market (-1.2%) was weaker as the enthusiasm seen in recent months waned. Cromwell Property Group (14.8%) and Centuria Industrial (9.4%) were stand out performers due to their less Covid-19 impacted portfolios. While Vicinity Centres (-11.2%), Mirvac Group (-6.4%) and Stockland (-4.3%) were significant contributors to the negative return seen over the month. Consistent with the broader market International REITs (2.3%) outperformed the local market. International exposure to healthcare facilities and retail were positive contributors.