The table below provides details of the movement in average investment returns from various asset classes for the period up to 30 September 2019.

Past performance is not a reliable indicator of future performance. The Global Listed property reference index changed to FTSE EPRA/NAREIT Developed Rental NR Index (AUD Hedged) as of September 2019

There were signs of the US-China trade tensions easing earlier in the month as a result of news of China exempting specific US products from previous tariffs and the US delaying a 5% increase to tariffs on US$250 billion worth of Chinese imports. Although there is still great uncertainty of the outcome of the US-China trade dispute, some further de-escalation is expected when talks resume in October.

Many believed that it was just a matter of time, but the Speaker of the House of Representatives, Nancy Pelosi, formally announced an impeachment inquiry against Donald Trump after a whistle-blower complaint questioned the ethics of some of Trump's dealings with Ukraine’s leader.

In the UK, the cloud of uncertainty around Brexit continues to grow after a legal ruling which stated that the five-week shut-down of the UK parliament was null and void. Parliament has resumed since the ruling but struggles to reach an approved exit deal to present to the EU before the scheduled exit date of 31st October.

In September we also saw drone attacks on Saudi Arabian oil facilities, which disrupted an estimated 6% of the global oil production levels. Despite initial fears for long term spikes in oil prices, there was an increase of just $2-4 per barrel from pre-attack levels as the Saudi productions resumed to close-to-normal production levels quickly.

We would suggest for oil prices to be of concern for the Australian and global economies, oil prices must more than double, which would result in petrol prices of around $1.95/L. Amongst other factors, this is due to the fact that the global economy requires half the amount of oil to produce one unit of GDP than it did three decades ago.

Oil prices are a long way from a choke point 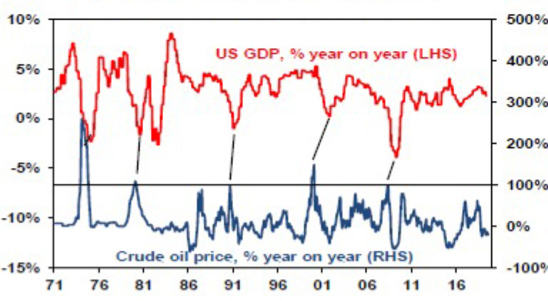 Having provided consecutive 0.25% interest rate cuts in June and July, the RBA decided to hold the cash rate at 1.00% in September. Despite this, Australian economic data continues to provide some mixed signals. The Australian economy grew by 1.4% YoY to the June quarter which was lower than RBA expectations. Despite some job growth over the last few months, lower skilled job vacancies indicate a lower labour demand and thus a decrease in employment growth ahead as well as a further rise in unemployment (which remained steady at 5.25% over recent months).

ABS employment data displayed that job growth in the last year was dominated by the public sector. This in addition to the limited wage growth in Australia may explain why the local economy has continued to experience weak GDP growth despite some positive economic data.

Although the global economy appears to remain reasonable, the RBA believes that the numerous geopolitical concerns have caused the economic risks to be tilted to the downside. This has led to an additional 25 basis points cut to the cash rate in October by RBA and suggests the potential for additional rate cuts in coming months. 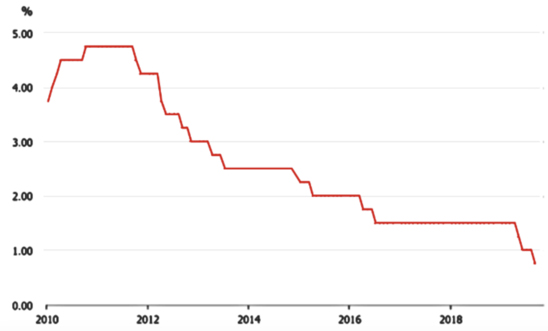 As global economic conditions remain somewhat stable despite the drone attack on Saudi Arabian oil production facilities and the uncertainty around the US-China trade war, Brexit and the political unrest in Hong Kong, investors moved away from defensive assets into other areas of the market.

On a currency hedged basis, international shares were up 2.3% in September. US shares lagged global equities with a rise of 1.9%, whereas European stocks were ahead, gaining 3.7%. Within Europe, German equities (+4.1%) performed particularly well and UK shares (+3.0%) finished the month strong despite continued political instability. Investors also displayed increased confidence in Japanese equities which were up 5.9%, while emerging markets shares lagged with growth of 1.8%.

Australian shares lagged global equities in September but still gained 1.8%, bouncing back up after the poor performance displayed in August. The domestic equities market saw investors move away from defensive assets.

The energy sector experienced the strongest performance (+4.7%) as the Saudi drone attacks reminded investors of the importance of local energy solutions. The financial sector also performed well, gaining 4.1%. Some of the defensive sectors underperformed the Australian equities market with Telecommunication services and healthcare falling -4.2% and -2.5% respectively. 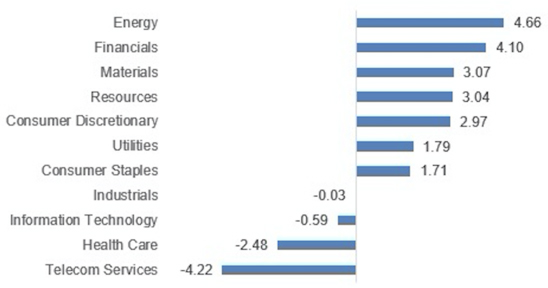 The top performers on the S&P/ASX100 in September include Afterpay which continued its strong performance (+15.8%) after posting its FY19 results at the end of August and Boral (+13.6%) which rebounded after falling over 20% in late August. FMG (+13%) appeared to benefit from a debt restructure and displayed strong earnings momentum despite the decrease in iron ore prices over the last two months. Amongst the worst performers on the index was CYBG (-18.4%) which increased its provisions for legacy PPI costs by 50%. Alongside most gold stocks, Evolution Mining was significantly impacted (-12.5%) as the price of the commodity fell by 7.3%. A2 Milk continued to fall (-10.3%) as investors wait to see how well the company can produce returns on the back of recent marketing expenses.

The US 10-year bond yield was up by 17 basis points to 1.67%. This contributed to the -0.6% fall in international fixed interest, which marginally underperformed the domestic market.

In line with the trend of other defensive domestic assets, Australian listed property was down -2.7% in September. On the other hand, global listed property outperformed its Australian counterpart as well as global equity markets, growing by 2.7%.