The longest US economic expansion ever

Does this mean recession is around the corner?
Dr Shane Oliver
Head of Investment Strategy and Chief Economist
AMP Capital

Key points
Introduction
A common concern ever since the Global Financial Crisis (GFC) ended a decade ago is that the next recession is imminent. This concern has become more pronounced recently as yield curves – ie the gap between long-term bond yields and short-term borrowing rates - have inverted (or gone negative) as in the US. This concern has taken on added currency now that the US economic expansion is the longest on record. Surely it must be living on borrowed time?
This matters a lot. The US is the world’s biggest economy in US dollar terms (at 24% of world GDP), its share market is around 56% of global share market capitalisation and being central to the world’s financial system it sets the direction for global share markets, including Australia’s. What’s more, while share corrections (say falls of 5-15%) and even mild bear markets (with say a 20% decline that turns around quickly) are common, the key driver of whether they turn into a major bear market (where shares fall 20% and a year later are down another 20% or so like in the GFC) is whether we see a recession or not – notably in the US (see the table in Correction time for shares?). So, whether a US recession is imminent or not is critically important in terms of whether a major bear market is imminent.
Longest but not the strongest
The cyclical bull market in US shares is now over ten years old. This makes it the longest since WW2 and the second strongest in terms of percentage gain. And according to the US National Bureau of Economic Research the current US economic expansion that started in June 2009 is now 121 months old and compares to an average expansion of 58 months since 1945. This makes it the longest on record (since 1854). See the next two tables. But it’s noteworthy that it’s not the strongest. In fact, GDP and employment growth through this expansion have averaged around half that seen in the average post war expansion. Both have been the second weakest.
Cyclical bull markets in US shares since WW2

Data is for the S&P 500. A cyclical bull market is defined as a rising trend in shares that ends when shares have a 20% or more fall. It could be argued that the 20% fall in July to October 1990 was not really a bear market as it was too short & shares surpassed their prior highs within a year. If it was not really a bear then the latest bull market becomes the second longest.
Source: Bloomberg, AMP Capital.

US economic expansions since WW2

Absence of excess
Numerous growth slowdowns and recession scares – notably around 2011-12, 2015-16 and since last year - and post GFC caution have kept this expansion slow. A key lesson of past economic expansions is that “they do not die of old age, but of exhaustion”. The length of economic expansions depends on how quickly recovery proceeds, excess builds up, inflation rises and the central bank tightens. The current US economic expansion may be long, but it has been slow. As a result, it’s been taking longer than normal for excesses that precede recessions – around cyclical spending, debt and inflation - to build up. First, cyclical spending in the US as a share of GDP remains low. In particular, there has been no “boom” in spending on consumer durables, business or housing investment resulting in a glut that needs to be worked off as occurred prior to all of the recessions in the last 50 years. All are around or below long-term averages as a share of GDP, in contrast to highs seen prior to past recessions. Basically, no boom = no bust!
US cyclical spending is still low as % GDP 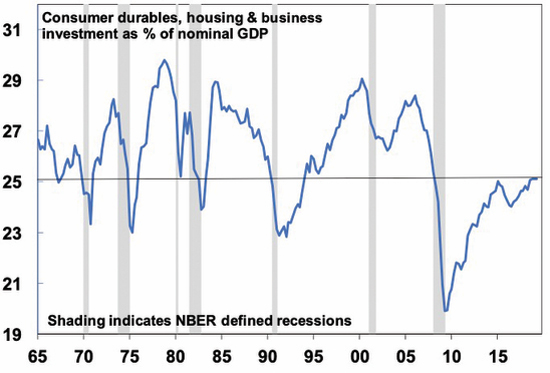 Source: NBER, Bloomberg, AMP Capital
Second, growth in private sector debt has been modest and well below the surge seen prior to the recessions of the early 1990s, early 2000s and 2008-09 as household debt growth has been weak. While corporate debt is up, the ratio of profits to interest payments is well above average and the ratio of corporate debt to assets is low. (Yes, public debt to GDP in the US is a concern but high public debt has not been a precursor to recession and the public sector’s taxing and money printing abilities mean it’s a totally different risk to excessive private debt.)
Finally, there is no sign of the surge in inflation that traditionally precedes recessions. Sure, the labour market has been flashing warning signs with unemployment and underemployment having fallen sharply, warning of a wages breakout and inflation pressure.
US unemployment is low, but wages growth still soft 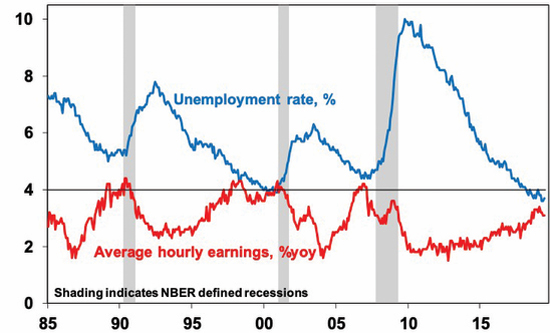 Source: NBER, Bloomberg, AMP Capital
However, there is arguably still spare capacity in the US labour market (the participation rate has yet to see a normal cyclical rise) and wages growth around 3% remains very low. The last three recessions were preceded by wages growth above 4%. And industrial capacity utilisation at 78% is well below levels that in the past have shown excess and preceded recessions. Reflecting this, along with intense competition which has been accentuated by technological innovation, core inflation has fallen below target.
The Fed Funds rate is still low relative to inflation & growth 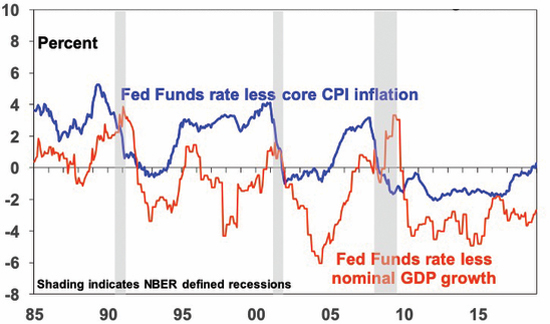 Source: NBER, Bloomberg, AMP Capital
So, while the Fed has raised interest rates since late 2015 it has not slammed the brakes on with tight monetary policy. Past US recessions have been preceded by the Fed Funds rates being well above inflation and nominal growth, whereas that’s not the case now. See the last chart. And given perceived risks to growth and the concern that it will be easier to deal with a rise in inflation than deflation, the Fed is now moving to cut rates again anyway.
The bottom line is that the excesses that normally precede US recessions – a spending boom, surging private debt and/or rising inflation/tight monetary policy – are absent. So while US economic expansion may be long in the tooth it’s far from exhausted.
But what about the inverted yield curve?
The inverted US yield curve that started in the last few months is certainly a concern as they have preceded past US recessions.
US yield curve inversions and recessions
Source: NBER, Bloomberg, AMP Capital
However, there are several reasons not to be too concerned. First, the lag from yield curve inversion to recession averages around 15 months (which takes us to second half next year), there have been numerous false signals and following yield curve inversions in 1989, 1998 and 2006 shares actually rallied. Second, various factors may be inverting the yield curve unrelated to growth expectations including still falling long-term inflation expectations, low German and Japanese bond yields and higher levels of investor demand for bonds post the GFC as they have proven to be a good diversifier to shares in times of crisis. Third, the retreat from monetary tightening has been a factor behind the rally in bonds but this is positive for growth. Finally, other indicators are not pointing to imminent recession – as noted above we have not seen the sort of excess that normally precedes recession.
The bottom line
Issues around the trade war and tensions with Iran certainly pose a risk to US growth and could drive short term volatility in share markets. But the combination of easing monetary conditions globally, the removal of caps on US Government spending for next year (which threatened a mini “fiscal cliff”) as part of a deal to suspend the debt ceiling and the absence of the excesses that contribute to recessions would suggest that US - and hence global and Australian - shares are likely to be higher in 6-12 months’ time.
Shares up and bond yields down – which is right?
This brings us back a puzzle that has worried some this year: share markets are up but bond yields are down…surely one market must be wrong? But this occasionally happens in the investment cycle. Basically, shares having fallen last year on growth fears are looking through short-term growth uncertainties and focusing on lower for longer interest rates and bond yields making shares relatively cheaper and the likelihood that monetary and fiscal stimulus will ultimately boost economic growth. By contrast bonds have been focussing on falling inflation and lower for longer short-term interest rates. So, there is logic behind both shares and bonds rallying at the same time. Ultimately though if global growth picks up over the next 12 months, bond yields will start to rise again – but it’s likely to remain gradual and constrained.