The property cycle and the economy

How far and for how long and what’s the impact on the economy?

Australian capital city home prices have fallen for 12 months in a row and are down 4% from their peak. Most of the weakness relates to the previous boom time cities of Sydney and Melbourne but prices are continuing to fall in Perth and Darwin. 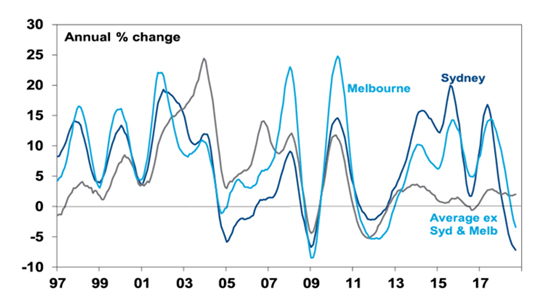 This begs the questions: how far will prices drop? and what will it mean for the broader economy?

High prices and high debt – how did it come to this?

The big picture view on Australian property is:

Home prices and household debt have gone up together

It’s popular to blame negative gearing, the capital gains tax discount and foreign buying for high home prices and debt. However, the basic drivers are a combination of the shift from high to low interest rates over the last 20-30 years boosting borrowing power, along with a surge in population growth from mid-last decade and the inadequacy of a supply response (thanks to tight development controls and lagging infrastructure) to suppress the resultant rise in the ratio of prices to incomes. Since 2006, annual population growth has averaged about 150,000 above what it was over the decade to the mid-2000s, which required roughly an extra 50,000 new homes per year, but dwelling completions have only recently caught up.

However, starting about a year ago it seems the tide has turned against property prices reflecting a range of factors:

On their own some of these are not significant, but together they risk creating a perfect storm for the property market.

For some time, we have been expecting top to bottom falls in Sydney and Melbourne prices of 15% spread out to 2020, implying price declines around 5% per annum. However, the risks are starting to skew to the downside – particularly around tighter credit and falling capital growth expectations made worse by fears of a change in tax arrangements. Auction clearances in recent weeks have been running around levels roughly consistent with 7-8% pa price declines. See next chart. 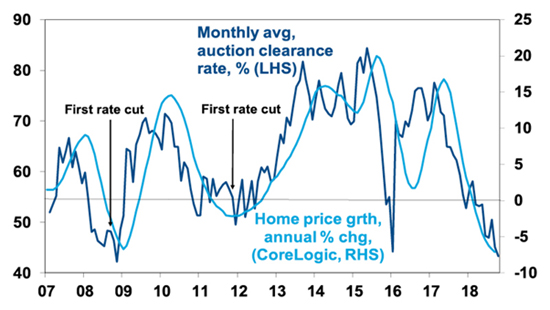 As such we are now allowing for a 20% decline in prices in these cities, again spread out to 2020, which would take average prices back to first half 2015 levels.

Property prices have a lot more downside in Sydney & Melbourne 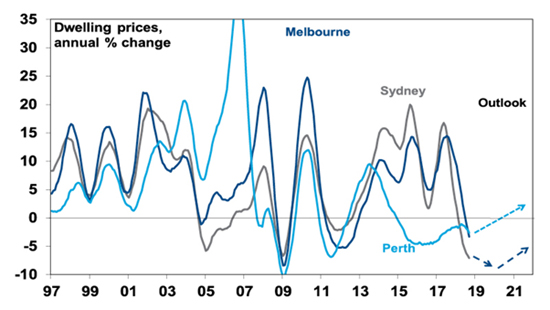 By contrast home prices in Perth and Darwin are either at or close to the bottom having fallen back to levels seen more than a decade ago, and prices are likely to perform a lot better in Adelaide, Brisbane, Canberra and Hobart along with regional centres as they have not seen anything like the boom in Sydney and Melbourne. But they will see some impact from tighter credit. Overall, we now expect national average prices to fall nearly 10% out to 2020 which is a downgrade from our previous expectation for a 5% national average fall.

A crash is a risk but remains unlikely

With prices now falling naturally the calls for a property crash are getting a lot of airing. But these have been wheeled out endlessly over the last 15 years or so. Our assessment remains that a crash (say a 20% or more fall in national average prices) is unlikely unless we see much higher interest rates or unemployment (neither of which are expected) or a continuation of recent high construction for several years (which is unlikely as approvals are falling) and a collapse in immigration.

Strong population growth is continuing to drive strong underlying demand for housing. While mortgage stress is a risk, it tends to be overstated: there has been a sharp reduction in interest only loans already; debt servicing payments as a share of income have actually fallen slightly over the last decade; a significant number of households are ahead on their repayments; and banks’ non-performing loans remain low. Finally, while Sydney and Melbourne are at risk other cities have not seen the same boom and so are less vulnerable.

However, the risk of a crash cannot be ignored given the danger that banks may overreact and become too tight and that investors decide to exit in the face of falling returns, low yields and possible changes to negative gearing and capital gains tax.

The property cycle and the economy

The downturn in the housing cycle will affect the broader economy via slowing dwelling construction, negative wealth effects on consumer spending, less demand for household goods and via the banks as credit growth slows and if mortgage defaults rise. This will provide an offset to strong growth in infrastructure spending and solid growth in business investment and will constrain economic growth to around 2.5-3% which in turn will keep wages growth and inflation low. All of which is consistent with our view that the RBA won’t be raising rates until 2020 at the earliest and given the downside risks related to house prices it may have to cut rates. Housing weakness will also continue to constrain bank share returns. 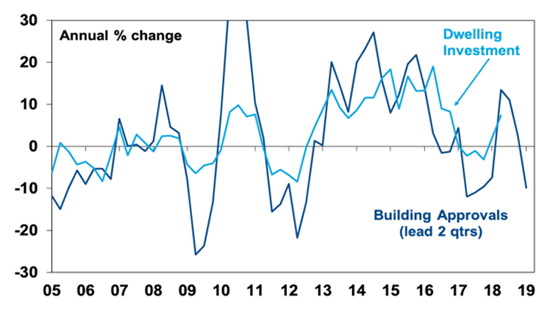 Over the very long-term, residential property adjusted for costs has similar returns to Australian shares. So, there is a role for it in investors’ portfolios. However, now remains a time for caution regarding housing as an investment destination – particularly in Sydney and Melbourne where it remains expensive, prices are likely to fall further & it offers very low rental yields. Best to look at other cities and regional areas that offer much better value.